King Lear is a tragedy about a man’s fall from Kingship to madness. King Lear mistreats his youngest daughter, Cordelia, and is then betrayed by his two other daughters, Goneril and Regan. Realizing his mistake too late, he agonizes over his folly until he becomes crazy.

After reconciling with Cordelia near the end of the play, he regains his sanity, but she is tragically killed soon afterwards. In one of the most heartrending scenes in the history of drama, Lear weeps over the dead body of Cordelia, crying, “Why should a dog, a horse, a rat, have life, and thou no breath at all?” The animal imagery present in this lamentation is prevalent throughout the play. Shakespeare uses this motif to explore man’s animalistic nature.

The initial conflict of the play begins when Lear intends to divide his kingdom among his three daughters so that he can “crawl toward death” unburdened. Lear’s use of the word ‘crawl’ evokes the image of a reptile or other animal, certainly not the image of an honorable King. This imagery foreshadows Lear’s descent from King to irrational animal.

After contemplating how he should divide his kingdom, Lear resolves to distribute his kingdom’s lands according to how much his three daughters love him. He therefore commands his daughters to tell him how much they love him. After the two elder sisters, Goneril and Regan, exaggerate the depth of their love for Lear, the youngest daughter, Cordelia, informs him that she loves him as much as a daughter should love her father – no more, no less.

Cordelia’s answer infuriates Lear and he roars at Kent, who tries to intercede on Cordelia’s behalf, “Come not between a dragon and his wrath.” Once again, Lear refers to himself as an animal. In this metaphor, Shakespeare reveals the striking similarities between humans and animals when passions guide human actions rather than reason. When animalistic instinct overpowers the rational side of human nature, then men are indistinguishable from animals. 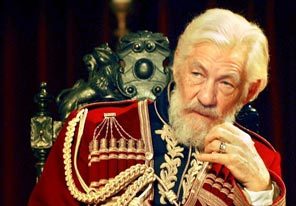 In a plot which parallels the Lear family narrative, Edmund betrays his brother Edgar and his father the Earl of Gloucester. Edmund’s betrayal forces Edgar to flee from the castle, and it also leads to Regan’s husband tearing out Gloucester’s eyes.

Released upon a heath, Gloucester blindly stumbles upon Edgar, who is pretending to be a lunatic. Gloucester sadly declares, “As flies to wanton boys are we to the gods; they kill us for their sport.” This simile emphasizes man’s insignificance. In the grand scheme of the universe, Gloucester asserts that no distinction exists between men and animals. Our deaths are no more consequential than the death of flies.

In the last scenes of the play, Lear wanders about the heath, and stumbles upon Gloucester. Lear is utterly insane at this point in the play and does not recognize Gloucester. Nevertheless, Lear vents his hatred of women to Gloucester. He says, “Down from the waist they are centaurs, though women all above.”

In this shocking assertion, Shakespeare uses a mythological allusion of a centaur, a half-horse and half-man creature, to comment on the duality of man. Although Lear’s accusation is extremely disparaging, the reader can find some hope for humanity in these lines; namely, that man is not a complete animal, but a combination of both beastly and divine natures. Indeed, one’s divine nature might even suppress the animalistic desires entirely, such as Cordelia does. Commenting on Cordelia’s godliness, Lear states, “Thou art a soul in bliss.”

King Lear is arguably the bleakest play which Shakespeare wrote. Through recurring associations of men with animals, the drama portrays humanity’s carnal nature in a shocking light. However, we can still take some solace in the “better angels of our nature” manifested in characters such as Cordelia. As we constantly struggle for control over our passions, Shakespeare advises us that we each have the power to suppress our worse nature, and live according to our divine being.